Interior goes from blah to that's much better

Before & After
Fly gets a Makeover

Fly's interior decor was already really nice, but I wanted to add some color for a pop of interest. I think you'll agree the look is better and more homey, and best of all, didn't cost a lot because you don't need much when you live tiny. (Feel free to hum "A Woman's Touch" from Calamity Jane)

I took measurements and pictures of the interior and found these fabrics in Joanne's. I told myself, "self, as soon as you find something that makes you happy, that's it!" I liked all of these, but I really wanted them together in the same pattern. The hunt began. (Pictures are below relevant text) 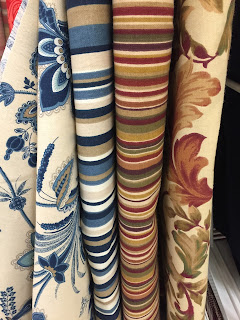 Before: Vanilla. Beige leather couch, neutral carpet and taupe throw pillows. yawn. (The storage cube, with a small tray on top, from the dorm section of Target doubles as an ottoman and also holds books and magazines.) 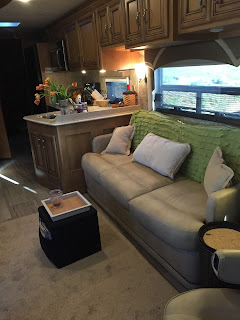 After: An inexpensive throw rug with some colors and a sneak peek at the reversible throw pillow with the new fabric. The rug is lightweight and rolls up for travel or cleaning day. 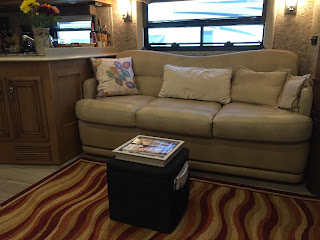 Before: The Newmar standard issue bedroom set is good quality. Now to add some personality. Turns out, the new bedspread became the new palette. 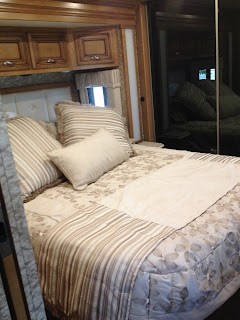 After: I scored this set at Anna's Linens going-out-of-business sale. ( :-( sorry, Anna.)  It's a Croscill pattern that has both maroon (gig 'em Aggies!) and Air Force blue (Off we go!), and some other fun colors, so I scored the combo look I so wanted. Our daughter reminded me she has the same pattern in her townhouse, so I realized that's another reason I like it so much, it already felt like home! Good taste, Lindsay! 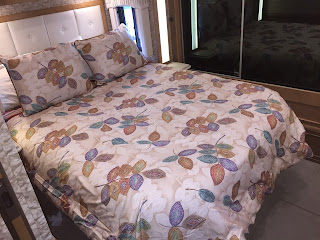 Our his and hers blankets are proof that Air Force blue and Aggie maroon can live side by side in peace. (Unless the teams play, but we all know Aggies would whoop AF...) 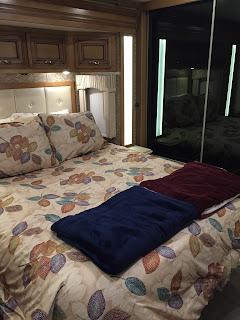 Before: The dinette area. Meh. 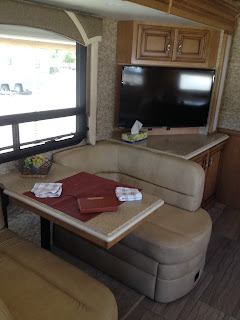 After: The same fabric (a set of curtain panels, trimmed and hemmed) carry the pattern into the living area of the rig. 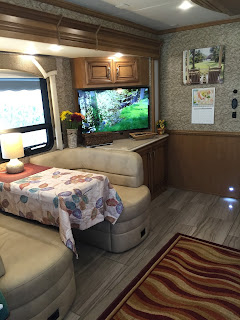 Before: The Ventana dashboard is sloped, so it's not suitable for shelving. We'd resorted to covering it with a shop cloth to prevent dust. No bueno. 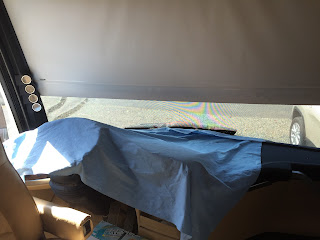 After: Much better. I used the other curtain panel, trimmed and hemmed. The weights in the ends  help keep the fabric in place. When I cut the drape, I had enough left over for the steering wheel. Yes, I've seen those steering wheel-to-table converters you're thinking of, but we usually swing the driver's seat around to use as a recliner, so a table there would be awkward. 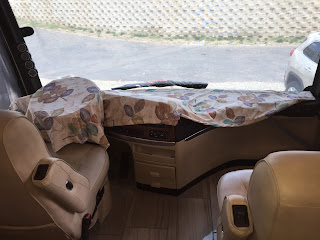 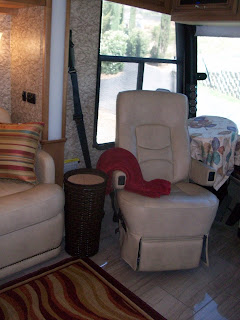 Bonus pic: Here's a great tall basket I found, and added a "lid" using another round basket. I then lined the cover with cork. We can set our drinks or remotes on it, and then when it's time to move, the lamp fits inside for a safe ride. Score. 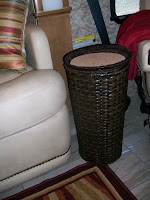 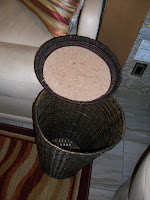 I'm glad we don't have to give up personal style and homey touches even though we're rig-living. 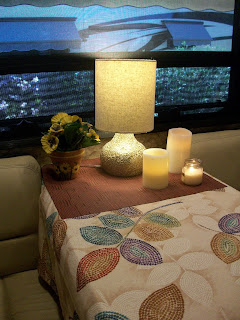 See you on the Fly!

Posted by Beverly Nault at 11:03 AM No comments:

In July 2014, we bought a 34' Newmar Ventana Diesel Motorhome with the idea that Gary could take his powered para-glider with us on vacation (more on that sport in a future post.)

We named her "Flight Risk," or Fly for short. Considering Gary's background as an Air Force pilot, as well as his current hobby, the name seemed appropriate. (Besides, I like the term, "fly" as in "your new outfit is fly"... so don't think of the insect. Think of the coolness.) 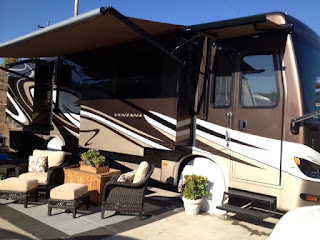 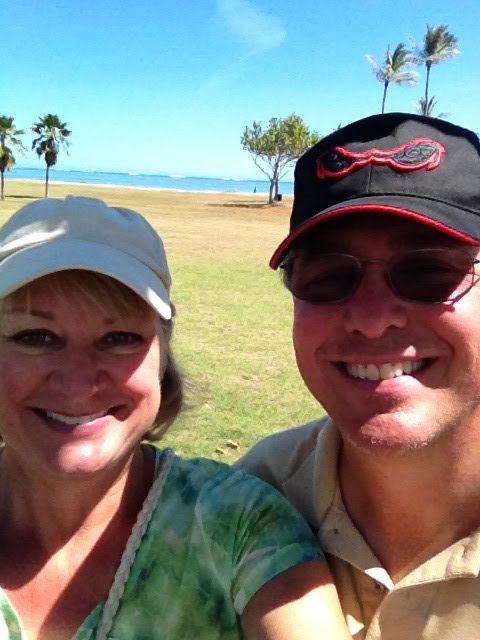